Our innkeepers, Bridget and Galen Sampson, fell in love through the hospitality industry.  Galen came into a restaurant where Bridget was bartending and—as they say—the rest is history. Shortly after they got married, they opened their own restaurant—The Dogwood—in Baltimore, Maryland. Galen was the chef, and Bridget ran the front of the house and made the restaurant’s desserts. 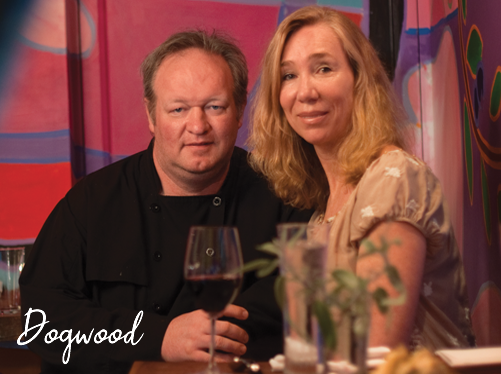 As a very young man, Galen—trained as an Electrical Engineer at Virginia Tech—followed his true passion to be a chef. Following a short stint as an engineer-entrepreneur, he joined the culinary team at the Stein Eriksen Lodge in Deer Valley, Utah as a cook and apprenticed his way up to Sous Chef. From there, Galen worked as a chef at luxury hotels: the Royal Sonesta Beach Resort and Hotel in Bermuda and the Homestead Resort in Hot Springs Virginia. While at the Sonesta, in the off-season, Galen continued his culinary education by taking classes at the Culinary Institute of America, (CIA) in Hyde Park, New York. In 1997, Galen returned to his hometown of Baltimore to work as the Executive Chef and, eventually, the Exec Chef and Director of Food and Beverage at the Harbor Court Hotel, the only five-star hotel in Baltimore at that time. He oversaw an award-winning, fine dining restaurant; a dining room that served locally-sourced Chesapeake cuisine; and all weddings and events until the hotel sold.

The couple followed Galen’s penchant for locally-sourced, fresh-from-the-market ingredients at their award-winning The Dogwood—one of Baltimore’s first farm-to-table restaurants. The Dogwood, a labor of love, also pursued a social mission of providing paid training to Baltimore individuals transitioning from addiction, incarceration, and/or homelessness. For this work, Galen was named a CNN Hero. 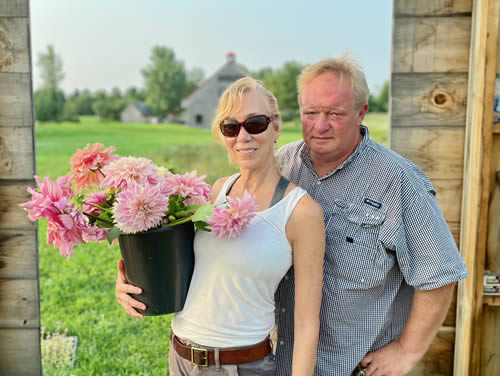 Bridget and Galen continued to explore the agricultural side of food. After closing The Dogwood, Galen worked for a growing season on an organic produce farm—Bellair Farm—in Scottsville, Virginia; a small town just south of Charlottesville—the home of Bridget’s alma mater, University of Virginia, where she studied English Literature. While the couple lived in Charlottesville, Bridget studied Fiction Writing (low residency) at Bennington College in Vermont and received her M.F.A.

Deciding they enjoyed the rural life, in 2015, the couple became innkeepers at a fly-fishing boutique inn in the Catskills, New York called the Beaverkill Valley Inn, which rested on the banks of the fly-fishing-famous Beaverkill River. Galen was the General Manager and Executive Chef of the inn, and he worked with the owners to make the menu New-York and, specifically, Catskill-centric. Bridget, who is a Master Gardener, oversaw the numerous flower gardens at the inn, and worked with Galen to grow produce and herbs for use in the inn’s kitchens. Both fell in love with the rocky, quietly majestic landscape of the Catksills, and Galen discovered the serenity of fly fishing.

For the past two years, Bridget and Galen worked for Philo Ridge Farm in Charlotte, Vermont. Galen oversaw the entire culinary program for this 400-acre regenerative agriculture farm and restaurant. Bridget led dinnertime front-of-the-house efforts through the challenges of the pandemic, while—during the day—she wrote and worked on the small flower farm she founded in Vermont. Though she loves all flowers, she specializes in dahlias and delphiniums, and she is eager to work with the lovely gardens at Lambert’s Cove Inn. Galen is excited to work with local farmers, watermen and women, and island producers to create a lovely seasonal menu at the Inn’s restaurant: Woods. His menus will be rustically elegant and seasonal, with a New England focus. He hopes to source as much as he can directly from the island.

In 2017, Bridget spent three weeks on Martha’s Vineyard at a writers’ residency and fell in love with the island, so the couple jumped at the opportunity to live and work on the island. A swimmer and water-lover, Bridget is delighted to be living near the sea full-time. Together, Bridget and Galen (along with their very beautiful border collie, Pearl) are looking forward to living the island life and to sharing the island’s bounties and beauty with the guests of Lambert’s Cove Inn and Woods restaurant.

Martha’s Vineyard is an island located south of Cape Cod in Massachusetts in the United States in North America that is known for being a popular summer colony. Martha’s Vineyard includes the smaller adjacent Chappaquiddick Island, which is usually connected to the Vineyard. The two islands have sometimes been separated by storms and hurricanes. The land area is about 96 square miles.

The Vineyard was home to one of the earliest known deaf communities in the United States; consequently, a sign language, the Martha’s Vineyard Sign Language, emerged on the island among both deaf and hearing islanders. There is a reported year-round population of 16,535 residents. During the the summer, the population can swell to more than 100,000 people.